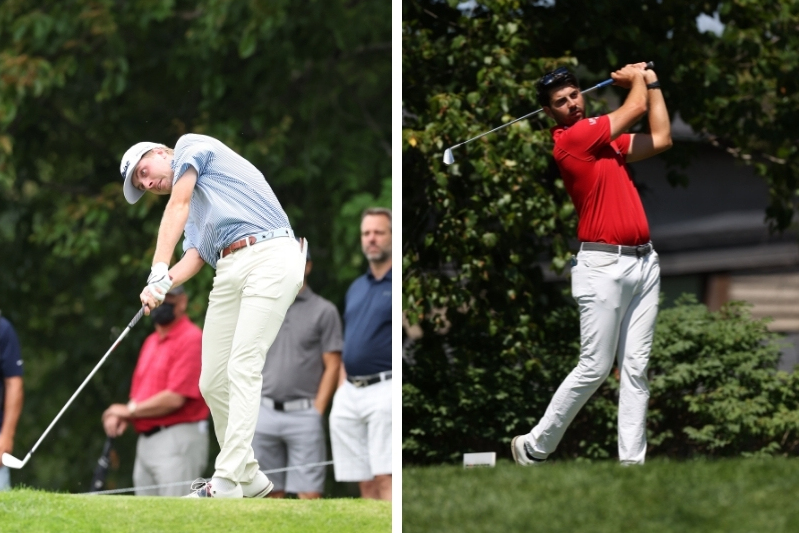 Joey Savoie Still in the Race

Blainville, August 6, 2022 – Prior to Noah Goodwin’s win last week in Ontario, there was a five-year gap in wire-to-wire finishes on PGA TOUR Canada. Now, it’s looking more and more like there might be two in seven days.

Ryan Gerard is on the cusp of doing so at the Québec Open at Club de Golf Le Blainvillier. He’s 17-under after 54 holes and takes a four-shot lead into Sunday’s finale. The former University of North Carolina standout fended off any serious challenges with a back nine that featured four birdies and an eagle.

“I just really played solid and did exactly what I needed to do,” said Gerard, who credits good approach shots for his success on the final holes. An eagle on No. 11 was his first as a PGA TOUR Canada member.

Gerard enters the final round with a four-stroke advantage over Justin Doeden (-13). Gerard’s quest for a wire-to-wire win, he said, will come down to doing what he has in the past three days.

“I’ve just got to take it one shot at a time. I can’t get ahead of myself,” said Gerard, who noted that the course will probably play a little bit different Sunday morning than it will in the afternoon. “I’ve just got to stay patient and keep doing my thing. If I do what I need to do, I’ll be just fine.”

As for the actual task of leading from Thursday to Sunday, Gerard doesn’t think there’s any difference in finishing things off.

“Winning is hard in general,” said Gerard, who added he just wants to play his game, stick to the plan, and hopefully come out with a win.

“[Sunday] is just go time, really,” Nesbitt said. “I’ve got to make some birdies. There are a lot of good players to catch, but we’ll see what we can do.”

Did you know wire-to-wire wins on PGA TOUR Canada stopped for five years after Robby Shelton prevailed at the GolfBC Championship in 2017? Shelton has gone on to win three Korn Ferry Tour events.

How the top Canadians fared

Joey Savoie, of Québec, and Drew Nesbitt, of Ontario, are in contention heading into the final round. They are both 10-under and tied for fourth.

Ryan Gerard’s last victory came in September 2021, while he was still playing for the North Carolina Tar Heels. He won the Rod Myers Invitational, defeating Maximilian Steinlechner by two strokes. As an amateur, Gerard reached as high as No. 82 in the World Amateur Golf Ranking.

Fortinet Cup points leader Danny Walker failed to make the cut this week and is in danger of losing his lead in the season-long competition. Tournament champions receive 500 points at each event and players missing the cut do not get any. Walker entered the Québec Open with 720 points. Brian Carlson (620), Wil Bateman (597), Noah Goodwin (520) and Scott Stevens (519), who also have wins this season, are the closest contenders for the $25,000 prize and Korn Ferry Tour status for 2023. Carlson is tied for 19th with 18 holes to play, while Bateman is tied for 14th and Stevens is tied for 40th. Goodwin withdrew from the tournament after the first round.

The action will resume in threesomes on Sunday morning at 7:00 a.m. at Club de golf Le Blainvillier, where the crossovers of the final round were rescheduled in the hope of outrunning the thunderstorms expected at the end of the day.

“It’s crazy. There are so many people out here just watching, basically, mini-tour guys hack it around. So, it’s really cool for us, especially, just seeing crowds.”  — Ryan Gerard

“I think it’s good for the sport in our province.” — Joey Savoie on the calibre of play and the support of the community watching the tournament

"I played +1 (73) today and my goal will be to play a good last round tomorrow. For me, there's no stress and the goal is just to make as many birdies as possible. There are some really big players in the tournament, many of whom we will see on the PGA Tour one day, so I'm quite proud to be a part of the weekend rounds." – Francis Tanguay

"I had a little bit more trouble on the greens today. It's a shame because I hit the ball really well and, unfortunately, I couldn't capitalize on my birdie opportunities. You're never completely satisfied in golf, but I'm still happy with my work this week. – Étienne Papineau

"The putts didn't sink in today! I felt great this morning and hit the ball really well, but I wasn't able to go out and get the birdies. There's another big round tomorrow and we're going to keep pushing for more and get ready for the next tournaments." – Max Gilbert 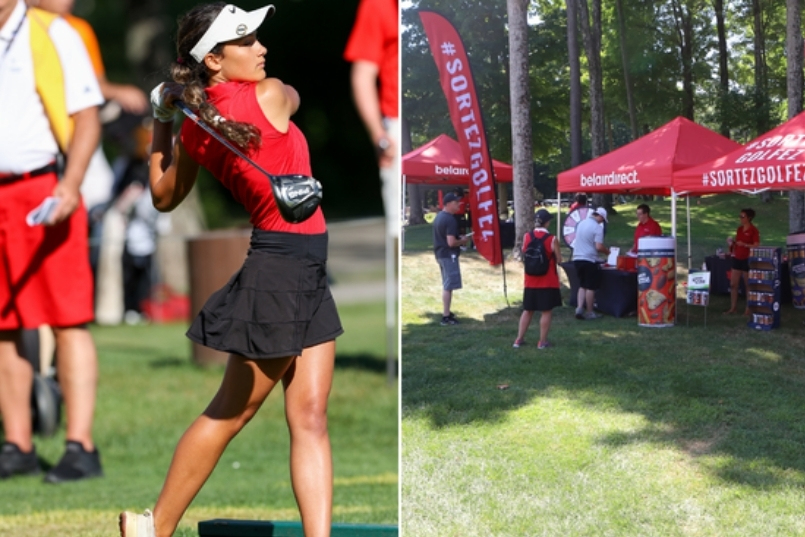 A Day of Festivities

Many people came to the Club de golf Le Blainvillier on Saturday, not only to watch the best players compete in the third round of the Québec Open, but also to see the performances of the new generation of Quebecers who took part in the traditional Junior Skills Challenge.

Overall, 78 young athletes in eight categories took part in the event, which focuses on developing the key golfing skills of putting, chipping and driving - as well as serving as an introduction to competition.

Moreover, many spectators dressed in red to celebrate the Sortez, golfez day, organized in collaboration with belairdirect, Cruise, and Snack Pow. Visitors were able to take part in activities that focused on the fun of playing golf in a festive atmosphere and win several prizes.

One thing is for sure, fun and good vibes were the order of the day!

PGA TOUR CANADA ALUMNI: After back-to-back PGA Tour victories, 2013 graduate Tony Finau moved up to No. 13 in the official World Golf Ranking, making him the highest-ranked current player on the PGA TOUR Canada. Since the tour's inaugural season in 2013, more than 250 players advanced to the Korn Ferry Tour, 46 of whom have won 52 times. From there, 54 players moved on to the PGA TOUR, 14 of whom have won 18 times. They are Finau, Corey Conners, Mackenzie Hughes, Joel Dahmen, J.J. Spaun, Nick Taylor, C.T. Pan, Talor Gooch, Adam Long, Aaron Wise, Cam Davis, Ryan Brehm, Chad Ramey, and Sepp Straka. There are currently 10 Canadians on the PGA Tour.