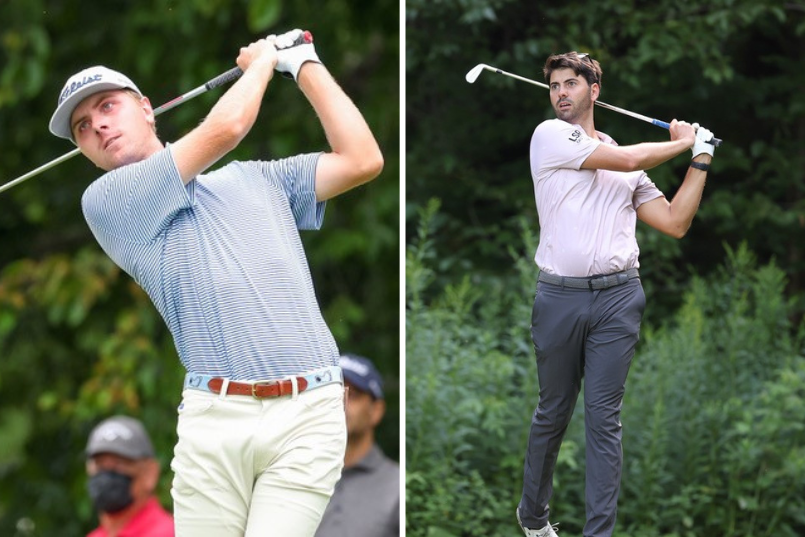 Blainville, August 5, 2022 – For the second straight round, Ryan Gerard sits atop the provisional overall standings at the Québec Open, this time at -11 (133). In addition to compatriot Thomas Walsh (-10), the American will have a number of contenders in his sights, including Joey Savoie, who is tied for third at -9 (135) heading into the weekend.

The Québec player had another good day on the fairways of Le Blainvillier and he is more than ever in the race for the coveted title. "If someone had told me, at the beginning of the tournament, that I would be in this position after two days, I would have signed the cheque right away," said the author of a decisive eagle on the eighth hole on Friday.

"It was by far my best shot of the day, and it changed my momentum," continued the player who carded a round of 67 (-5). "I wasn't necessarily playing badly, but after that I was more accurate and gave myself more opportunities for birdie."

Savoie, who is tied with three U.S. representatives, will be among the last starters on Saturday. He will tee off at 1:00 p.m. with Bryce Hendrix, and there is no doubt that many spectators will want to follow the action closely on the Laurentians' course.

"It's very exciting! It's a great experience for me and for all the fans in Québec. We have several good players from the province who will also be playing, and it will be very thrilling. Personally, my strategy will be the same, I will go one shot at a time to give myself the best opportunities, without seeking a miracle," concluded Savoie.

The latter will be joined by five other Québec representatives over the weekend, starting with Max Gilbert (Saint-Georges) and Brandon Lacasse (Pinegrove) who, with their respective cumulative scores of -6 (138) and -5 (139), are currently tied for 13th and 21st place.

"I hit some really good shots off the tee to make three birdies in a row. It gave me some rhythm and I was able to keep the momentum going. That's what made the difference compared to yesterday. My approaches were great, and I know I could have cut even more shots. It was fun and we're going to try to do the same thing tomorrow," commented Gilbert after the day.

"It's been two days since the putts have fallen and I made a big mistake that cost me a double bogey today. However, I'm very happy to have come back strong to finish my day at 71 (‑1)," explained Lacasse, who will face a tough test on Saturday morning.

"My goal in coming here was to aim for victory and nothing less. My performance level is good, and I've done some good preparation work with my coach.  I know we can afford to aim for the top!"

Étienne Papineau (Pinegrove, -3), Francis Tanguay (Triangle d'Or, -2), and Yohann Benson (Le Mirage, -2) are the other Quebecers who will be in the field this weekend. No less than 10 other golfers from the province also participated in the Québec Open this week, but none of them could make the cut to the top 60 and ties at -2 (142).

The action will resume on Saturday morning at 7:30 a.m. at Club de golf Le Blainvillier, for another day that promises to be full of surprises.