Another wire-to-wire winner as Gerard prevails in Québec 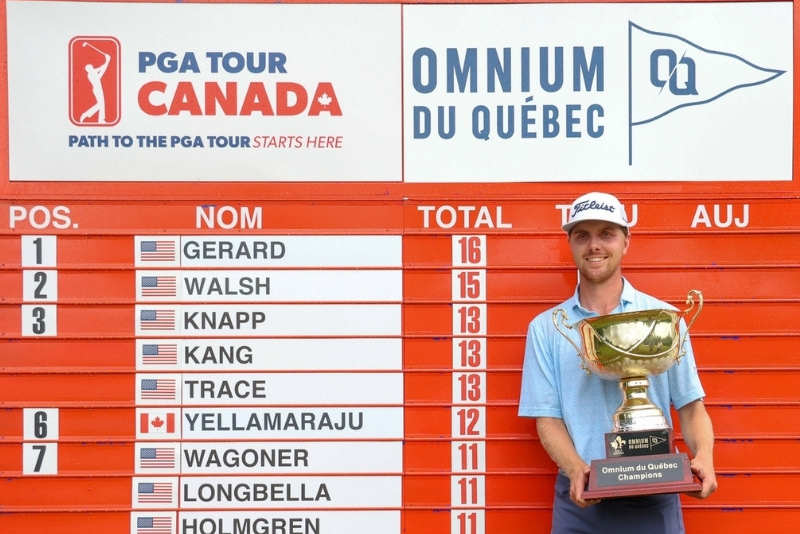 Blainville, August 7, 2022 – For the second consecutive week there was a wire-to-wire winner on PGA TOUR Canada. Ryan Gerard accomplished the feat Sunday in the Québec Open at Club de Golf Le Blainvillier. The former University of North Carolina star capped off his four rounds by finishing 16-under, winning the tournament by one stroke over Thomas Walsh.

It was only the second wire-to-wire finish on PGA TOUR Canada since 2017. The other, however, came just seven days ago. Noah Goodwin won the Sotheby’s International Realty Canada Ontario Open in identical fashion.

“It was a really cool experience. I just really tried to stay patient and stay calm out there today,” Gerard said. “I knew I was leading by quite a few at one point, but I just tried to take it one shot at a time. You never know what can happen.”

Walsh managed to make things challenging for Gerard. Walsh had an eagle on No. 2 and picked three birdies in moving to 15-under overall through 11 holes. That’s when the wind picked up, and Walsh wound up playing even-par the rest of the way.

“I didn’t think catching Ryan was going to happen,” Walsh said. “I played with him [Saturday], and the kid is a stud. So, I just wanted to at least make him earn it.”

Gerard had a fairly conservative round going early on. He had birdies on No. 5 and No. 7. Difficulties came down the stretch, with bogeys on the ninth, 16th and 17th holes. It forced him to make a par on the 18th hole to avoid a playoff, which he did. It tightened the eventual margin of victory but failed to alter Gerard’s perspective.

“You just really have to lock in and stay focused on your game. You can’t worry about what anyone else is doing,” said Gerard, who shot a 73 on Sunday. “You’re just focused entirely on what you need to be doing. Everything else is a distraction.”

Before prevailing in his fourth tournament as a professional, Gerard missed the cut at the Osprey Valley Open presented by Votorantim Cimentos - CBM Aggregates. He tied for 26th at the Sotheby’s International Realty Canada Ontario Open last week and finished in an 18th-place tie at the Prince Edward Island Open. The 23-year-old from Raleigh, North Carolina, earned conditional status with a 15th-place finish at the Qualifying Tournament in Weston, Florida, in February.

Gerard credits his victory here to playing three solid rounds to give himself a big enough lead going into Sunday.

“I managed my game really well this week,” he said. “I didn’t throw shots away. I hit the shots where I needed to. I struck it well. I kept it on the proper side of the hole. That allowed me to stay aggressive when I was hitting putts and not letting anything get away from me. I think that was probably the biggest key.”

Everything else, he continued, just lined up.

“And sometimes it’s your week and you win,” Gerard added.

There was a three-way tie for third. Jeffrey Kang, Jake Knapp and Travis Trace all finished at 13-under. Knapp had the best round of the day. He shot a 65 and moved up the leaderboard with eight birdies, including seven on the first 12 holes.

“It’s always nice to get off to a good start,” said Knapp, who felt he played well all week but just didn’t score well. “It felt good to have some putts fall and hit some shots a little closer today.”

PGA TOUR Canada takes a break next week. It resumes Aug. 18-21 in Winnipeg with the CentrePort Canada Rail Park Manitoba Open at the Southwood Golf and Country Club.

How the top Canadians fared

Sudarshan Yellamaraju, who was born in Visakhapatnam, Andhra Pradesh, India, but is a Canadian citizen, finished sixth overall at 12-under to lead all Canadians.

Thomas Walsh took a break from the Korn Ferry Tour to “rehaul” his game after playing in 17 tournaments. The University of Virginia alum opted to play in two PGA TOUR Canada events as part of the process and came in second twice, finishing as a runner-up at both the Sotheby’s International Realty Canada Ontario Open and the Québec Open. “I’ve really worked hard, and to go second-second sucks because it feels like I’m always the bridesmaid,” Walsh said. “But I think it shows I’m going in the right direction.”

Amongst Québec players, Max Gilbert played in his first PGA TOUR Canada tournament since his one appearance in 2019. He made it a good one. Gilbert took full advantage of his sponsor’s exemption and went on to tie for 19th this week à -8 (280), shooting a final-round 69 (-3) to shoot up 14 leaderboard positions.

"I played really well today! I gave myself a lot of good opportunities and avoided difficult situations throughout the day. It was a pretty easy round, so I'm super happy! We'll try to keep the momentum and build on it for the next few weeks," said the golfer from Club de golf Saint-Georges.

His top-20 finishes earn him an invite into the next tournament, the CentrePort Canada Rail Park Manitoba Open the week after next in Winnipeg, Manitoba.

Joey Savoie struggled on the greens on Sunday and shot a final round +1 (73) to wrap up the event. "I played well, that's what's a bit annoying. I hit the ball well, I reached the greens, but I was always just a little bit short on my putts," he commented after his day's work.

The Pinegrove golfer dropped seven spots on the leaderboard and finished his tournament tied for 11th at -9 (279). Despite the slide, Savoie said he was pleased with the work he put in during the week and was in contention until the very last day.

“It's rewarding in my development to play in front of my family and friends, at high intensity, and to play in the last groups on the weekend,” he said. “I'm gaining experience and getting better every time I'm in this position. It was great to play in Québec and I'm taking away a lot of positives pointers.”

Four other Quebecers were also in action on the fairways of Club de golf Le Blainvillier on Sunday. Of the bunch, Étienne Papineau (Pinegrove) had the best result with a 35th-place tie at -5 (283).

“I hit some squirrelly shots toward the end. The ball just started going really far, and I’m just happy to scrape by with a win.” — Ryan Gerard

“We practice for these situations. I would have taken myself against a lot of people trying to make par there on 18.” — Ryan Gerard on needing par on the 72nd hole to win

“I hit it in the fairway. From there I knew I could take care of it, just try to make sure I make a smart shot and keep it underneath the hole. I made it as easy as possible.” — Ryan Gerard on how he played his 72nd hole of the week

“I’ve been playing college golf for the last few years. It’s the same thing when you’re trying to win out there. You just really have to lock in and stay focused on your game. You can’t worry about what anybody else is doing.” — Ryan Gerard

"It wasn't necessarily the last round I was hoping for, but I'm still happy with my tournament, especially after such a long absence. Getting to the weekend rounds allowed me to relive some great moments on the course and I'm very happy with my week." — Francis Tanguay

"There are courses where you are very comfortable and others where you are not, which is the case for me here. I hit the ball really well, but I had a lot of trouble on the greens. It's still a great preparation for the Canada Cup and it was really fun to play with the next generation of golfers.” — Yohann Benson

"I had trouble making long putts this week, so that didn't help me much. I'm a little disappointed, because I was hoping to do better in front of my family and friends, but it's still a great week, especially with such a strong group of golfers. It's only a matter of time before everything clicks together to play great golf.” — Étienne Papineau

The focus now turns to the Sani Marc - Fenergic Canada Cup, which will bring over 150 golfers to the Victoriaville Golf Club next week. Pro-Am tournaments will be held on Tuesday and Wednesday, followed by the official rounds of competition starting on Thursday.

PGA TOUR CANADA ALUMNI: After back-to-back PGA Tour victories, 2013 graduate Tony Finau moved up to No. 13 in the official World Golf Ranking, making him the highest-ranked current player on the PGA TOUR Canada. Since the tour's inaugural season in 2013, more than 250 players advanced to the Korn Ferry Tour, 46 of whom have won 52 times. From there, 54 players moved on to the PGA TOUR, 14 of whom have won 18 times. They are Finau, Corey Conners, Mackenzie Hughes, Joel Dahmen, J.J. Spaun, Nick Taylor, C.T. Pan, Talor Gooch, Adam Long, Aaron Wise, Cam Davis, Ryan Brehm, Chad Ramey, and Sepp Straka. There are currently 10 Canadians on the PGA Tour.